Toy Story Land In Disney’s Hollywood Studios: All You Need To Know

This brand new land makes it’s debut on June 30, 2018 in Disney’s Hollywood Studios. We have everything you will need to know about this very anticipated new land!

It’s official! Toy Story Land, the highly-anticipated toy-filled land inspired by the beloved “Toy Story” films, will open to guests at Disney’s Hollywood Studios June 30, 2018. When it opens, guests visiting Toy Story Land will “shrink” to the size of a toy and join in on the fun Woody, Jessie, Buzz, and Andy’s other beloved toys are having in Andy’s backyard.

And we have ANOTHER awesome update!! It just keeps getting better and better! Here is your DIGITAL MAP to guide you all around this new land! Just click the link! You will also find this map on your My Disney Experience App! 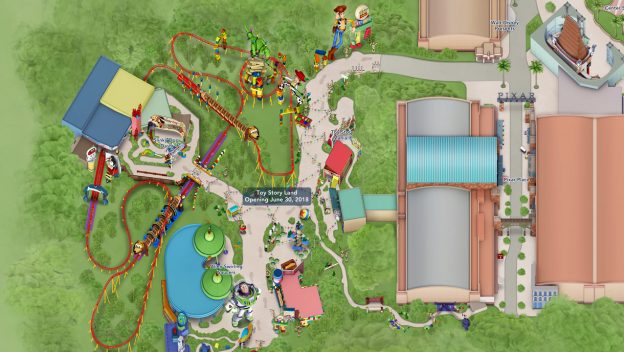 Walt Express has SEVERAL updates about TOY STORY LAND! Everyone is highly  anticipating this brand new land and simply just cannot wait. Check out this brand new video from our friends at Disney Parks Blog.

Our friends in Walt Disney Imagineering just shared a new video with us from the Toy Story Land site, where Imagineers of all disciplines are putting the final touches on this thrilling new land. In the video above, Imagineers Ryan Wineinger, Shannon Mashchak and Alexis Cummins share just how many disciplines within Walt Disney Imagineering – such as Show, Project Management and Graphics – have joined forces to bring this project to life. They also give us a look at one of the smaller, but essential details they’ve added to the land – graphics, such as those that appear on toy boxes and game boards that add authenticity to the land’s selection of toys.

“The graphics tell a story because they really help ground where you are,” said Graphic Designer Alexis Cummins. “Any visual is really going to do that for guests, especially at Toy Story Land. We’re using all of the things Andy would actually have at his disposal to make our signs and graphics.” 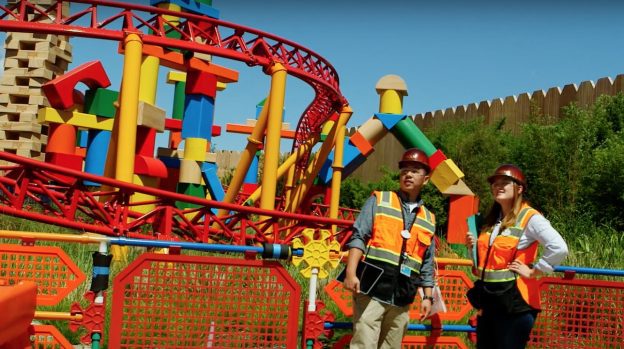 Toy Story Land will “shrink” guests to the size of a toy and allow them to explore Andy’s backyard – and all the fun he’s set up for his toys to have. At Alien Swirling Saucers, which is an attraction that’s been designed to look like a toy from Pizza Planet and placed in his backyard next to his Buzz Lightyear’s Star Command playset, Aliens fly around in their toy flying saucers while “The Claw” appears overhead. As you whirl around the toy planets and space stations as part of the game, you’ll swirl to the beat of a fun electronic space music soundtrack that includes eight songs that may sound familiar, but will be heard in a quirky way you’ve never experienced before. Guests will also see pizza details throughout the attraction, including pizza columns, a pizza space station and the Planet Pepperonia. 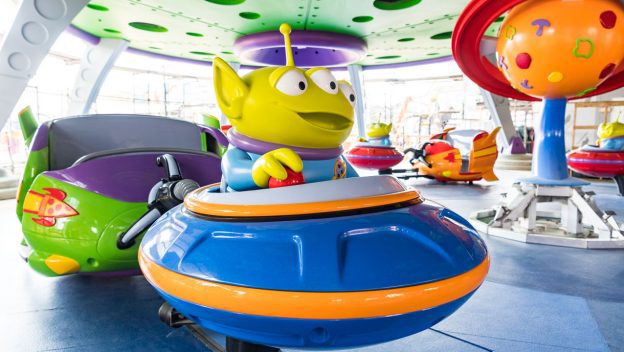 The third attraction in Toy Story Land is the classic Toy Story Mania, which has currently been undergoing a refurbishment.

Woody’s Lunch Box will bring us some amazing new dining options! We personally can’t wait to try them all. Get a complete list of the yumminess that awaits by going HERE. 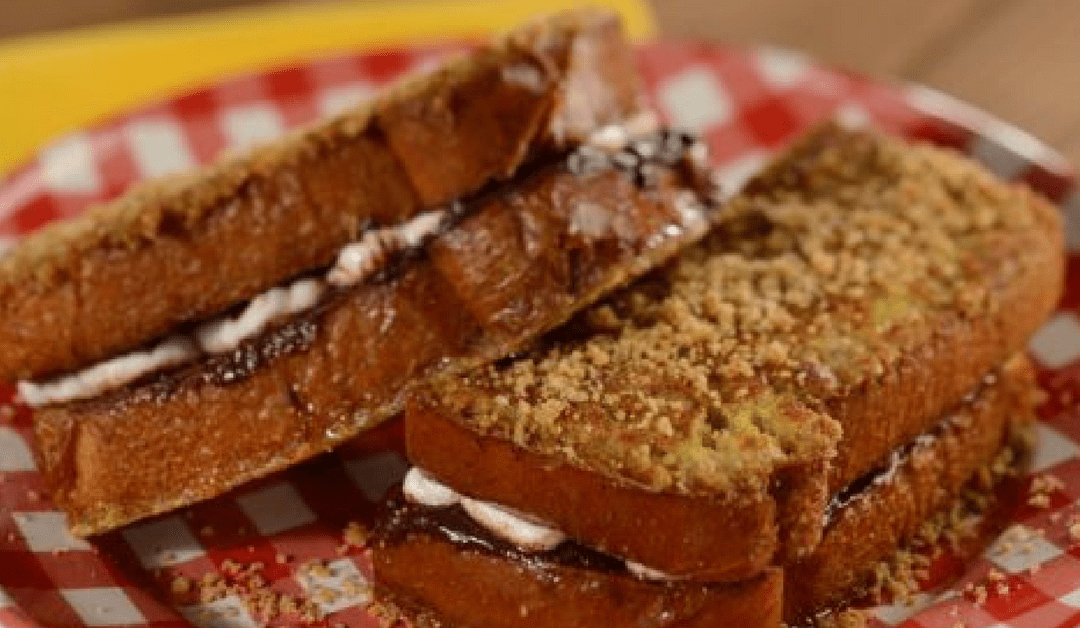 Woody, Buzz and Jessie will be greeting guests throughout Toy Story Land on a daily basis. And each character (along with the rest of the gang) will be joining in on the fun in a land where guests “shrink” to the size of a toy. For more details about meet and greets, just head over to TOY STORY LAND, MEET AND GREETS! 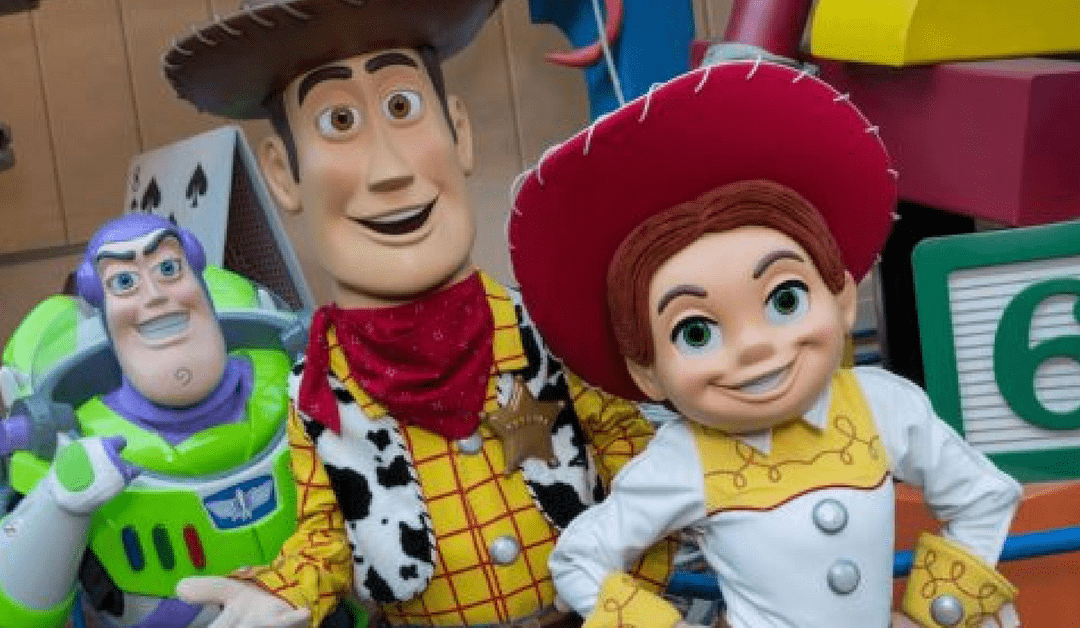 In addition to experiencing attractions in Toy Story Land, guests can also be entertained by the Sarge and the Green Army Man Drum Corps, who will march through the land several times a day and stop to play “Sarge Says” with guests, and other games with a larger-than-life Pixar ball and crayons. Guests also have the option to join in on their interactive boot camp to see if they have what it takes to become an official recruit in Andy’s Backyard. 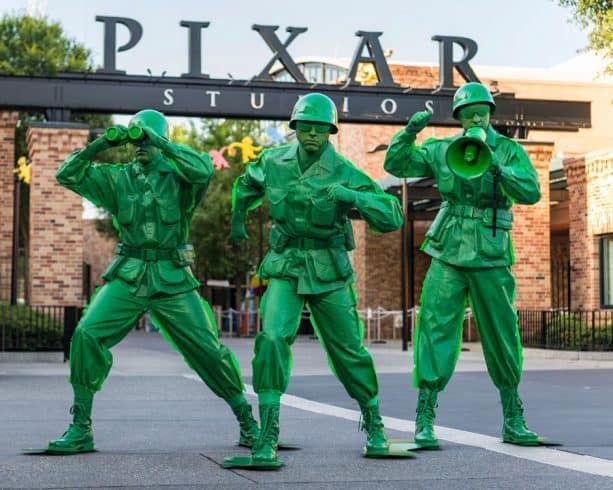 Do you have plans to take on this new land? We would love to hear about it! Just drop us a comment! 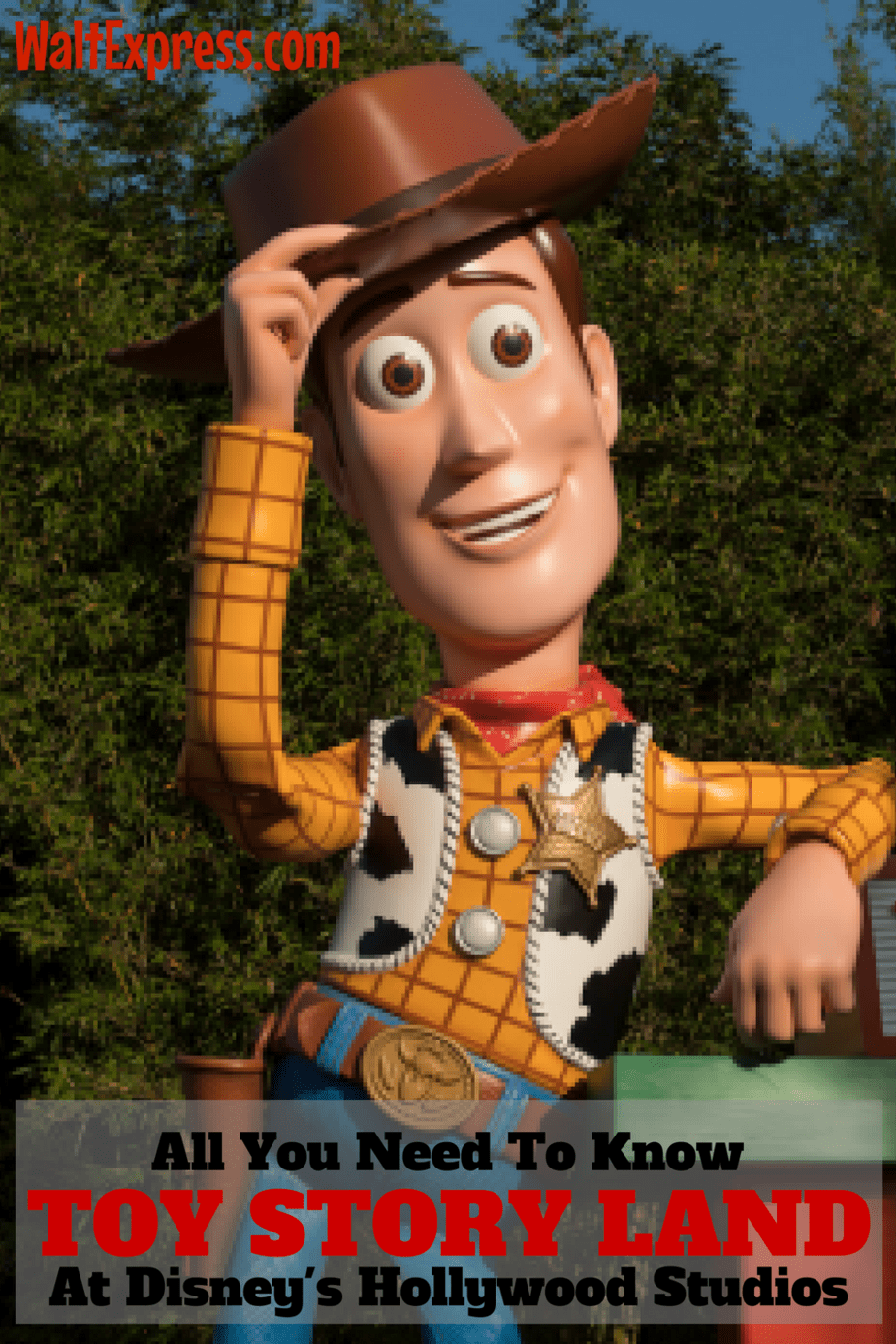 We would love to have you join our Facebook Group, DISNEY EXPRESS LANE! We have lots of Disney news and of course, Disney FUN! 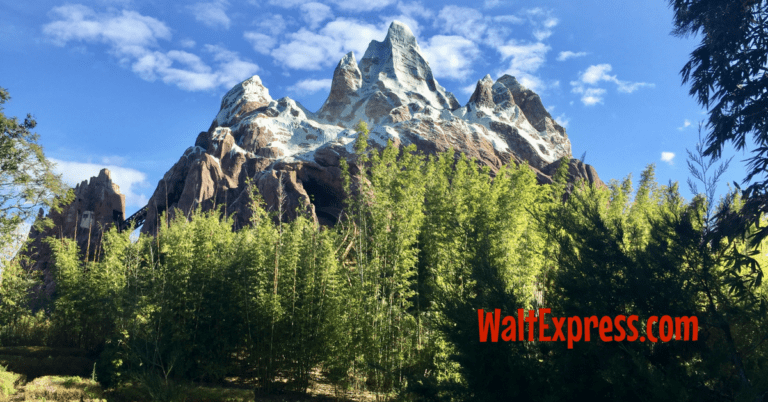 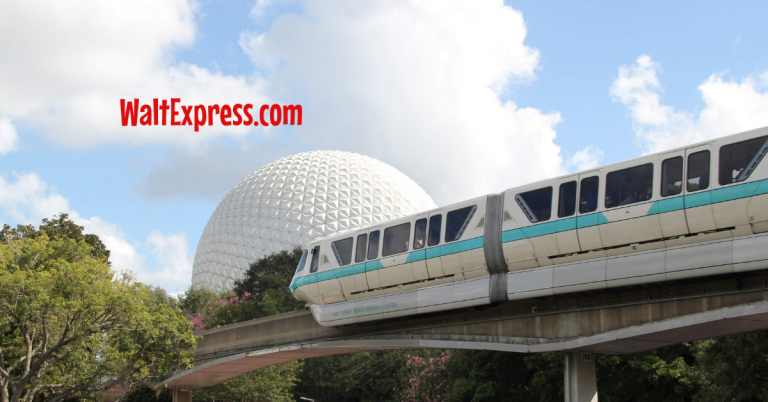 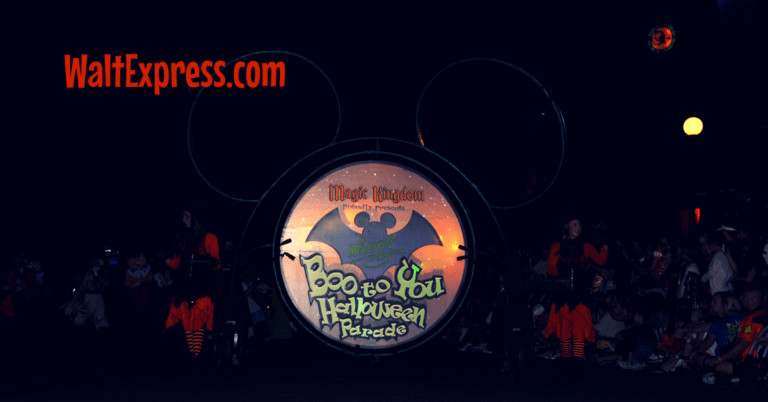 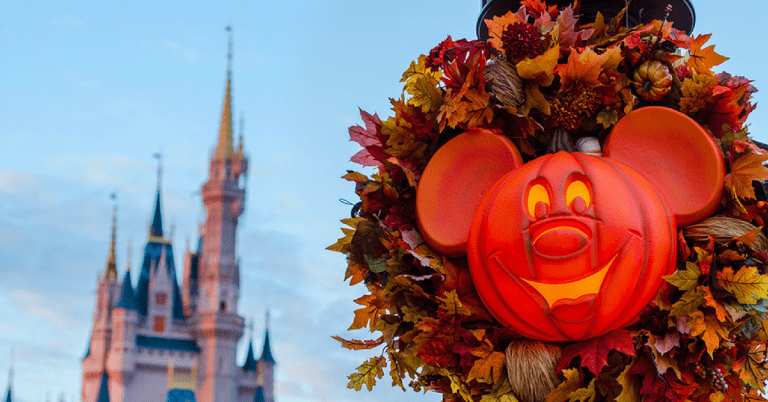 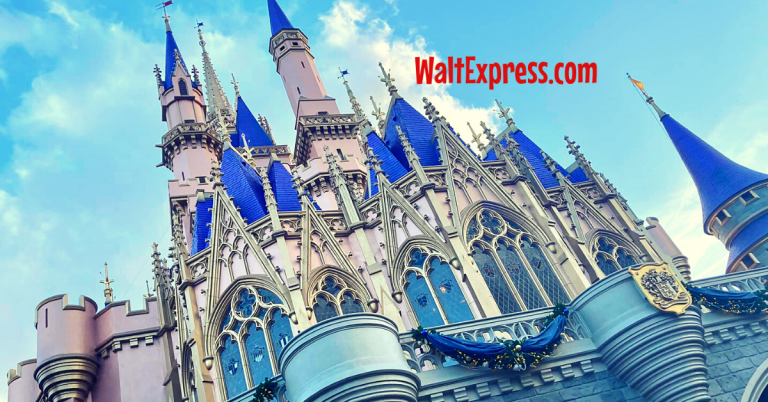 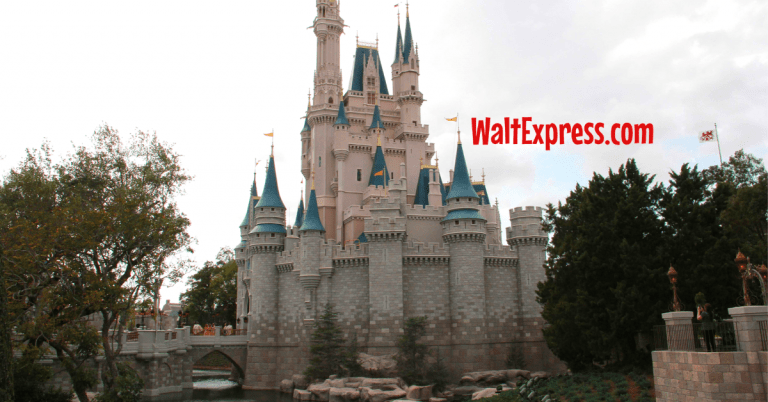